Movie theatres and Winnipeg go together like butter and popcorn.

The moviegoing experience has been a part of Winnipeg culture since the 19th century. More than just a leisure activity, how and where Winnipeggers see movies can be a barometer for gauging local cultural and economic trends.

Movie exhibition is an industry ever in flux. Just as was the case at the introduction of home video and television, many pundits say the emergence of online streaming and piracy amounts to a death sentence for theatres as we know them.

While these cries of the sky falling could be as misguided as their predecessors’, what is certain is that the future of movie houses, both locally and globally, is unwritten.

Two or Three Things We Know About Them

While it’s difficult to get exact numbers on Canadian box office revenue (Canadian and American box office are counted together as “domestic box office”), current stats paint a mixed picture.

However one reads the numbers, there have been local losses. 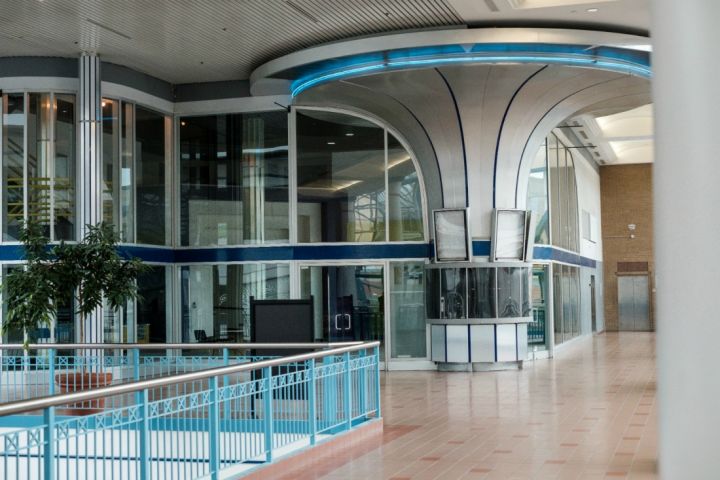 The IMAX in Portage Place is one of eight theatres that have shut down in Winnipeg since 2000.

Since 2000, eight Winnipeg movie theatres have shut down, which closed doors on a total of 22 screens. By contrast, only one new theatre has opened (Cineplex Odeon McGillivray), which added 12 screens.

The Sept. 18 purchase of Landmark Cinemas (Canada’s second-biggest chain) by the Belgian Kinepolis Group is another new factor in local uncertainty.

With their 2005 purchase of the Famous Players chain and the subsequent acquisition of Cinema City, Cineplex went from a virtual local nonentity to Winnipeg’s biggest theatre owner. The company has since embraced a variety of non-traditional facets to their theatres, including 3D projection, D-Box seats and special programming of live events.

“We don’t think of ourselves as movie theatre operators,” Marshall says.

“We provide entertainment destinations. While the movie business is still at the core of our business, we’ve evolved into a number of other businesses. At the heart of it, it’s all about entertainment.”

Those other forms of entertainment include The Rec Room, a complex of restaurants, live venue and arcade. Housed at a separate location from their multiplexes, there are currently three Rec Rooms nationwide. Marshall says the company plans to open 10 to 15 nationwide, including in Winnipeg.

While these broader business interests may be beneficial to Cineplex’s survival, it’s a separate question whether Canada’s biggest theatre chain not considering themselves theatre operators is a good thing for the future of movie theatres. Can moviegoing culture survive if its primary providers don’t consider it their principal job?

Symphony of a City 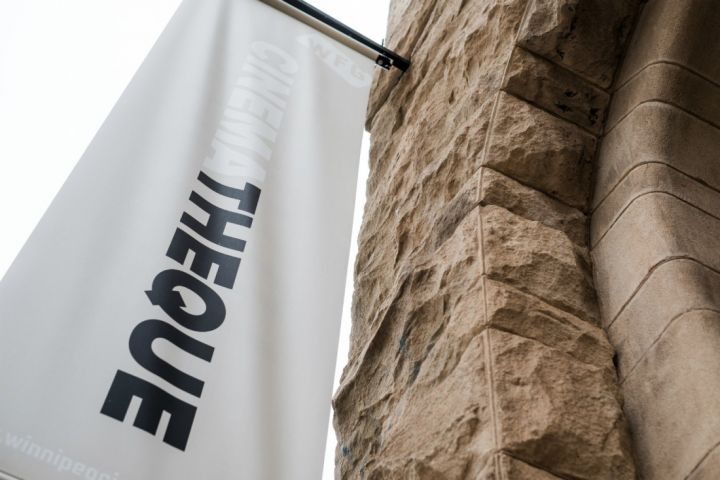 Cinematheque, the official theatre of the Winnipeg Film Group, was opened in 1982.

Dave Barber has been with Cinematheque, the official theatre of the Winnipeg Film Group, since its inception in 1982. The programming coordinator of the non-profit cinema says the hard work that goes into running an independent theatre is fueled by a love for movies.

“We love the art form and are always looking for great (films),” Barber says. Searching for them is a massive undertaking for which he attends film festivals, pores over film magazines and communicates with distributors.

“The difficulty today is that there are almost too many films. Anyone with a camera can make a film. There’s an overwhelming number of choices, and they’re not all good. You need to pay attention, because a gem can come from anywhere.”

Barber says he puts special emphasis on screening Canadian and Winnipeg films. The theatre also screens independent, documentary and foreign films. However, it’s not the only theatre with a curated selection of non-mainstream movies.

Cinema City Northgate opened in 1998 as a reduced-price, second-run theatre. But since being purchased by Cineplex, half of its screens have been showing films from India, the Philippines and other countries that Winnipeg’s expat communities call “the old country.”

“I used to live in The Maples, so I knew Northgate’s theatre and community very well,” Pat Marshall says. “A few years back, I was visiting Winnipeg, and I asked the manager if he had any new ideas. He said, ‘We have large Filipino and East Indian communities in this area. I think we’d do well bringing in films from those regions.’”

Marshall brought the idea to the company’s film bookers, who field tested it. It’s a strategy that obviously worked.

While some think recent trends spell doom for the theatrical experience, it may simply represent a shift in a local institution that has gone through many eras, booms and busts in the past century.

“When we look back from our perspective, we can see different eras of motion picture theatres,” Curle says. “The introductory period goes from about 1896, which is probably when the first movies were screened in Winnipeg, to 1911.”

According to Russ Gourluck’s book Silver Screens on the Prairie, that period began in earnest in May of 1899, when promoter John A. Schuberg erected the Edison Electric Theatre (a portable canvas tent on the west side of Main Street at Logan Avenue) to screen footage of the Spanish-American War.

In 1903, Schuberg built Winnipeg’s first permanent movie theatres, the Edison Unique Theatre and The Dreamland Theatre (which was managed by infamous silent film comedian Fatty Arbuckle). The following decade saw the construction of many new theatres, as well as the conversion of most of Winnipeg’s vaudeville theatres into movie houses.

“One thing you can say about theatres at that time is that they were all on Main Street,” Curle says. “The development of theatres corresponds with the main place of business shifting to Portage Avenue.”

That shift coincided with the emergence of Hollywood’s silent film period, and Winnipeg saw the construction of its first “picture palaces,” large and extravagant movie theatres like the Metropolitan and the Capitol.

“When you went into a silent movie, it was never silent,” Curle says. “It was always done with an orchestra. And in the Capitol and the Met, it was an orchestra! Many people made their living playing music for the cinemas.

“(Picture palaces) were luxurious, the whole idea of going into a wonderland. Very often they had French or ‘Oriental’ architectural motifs.” 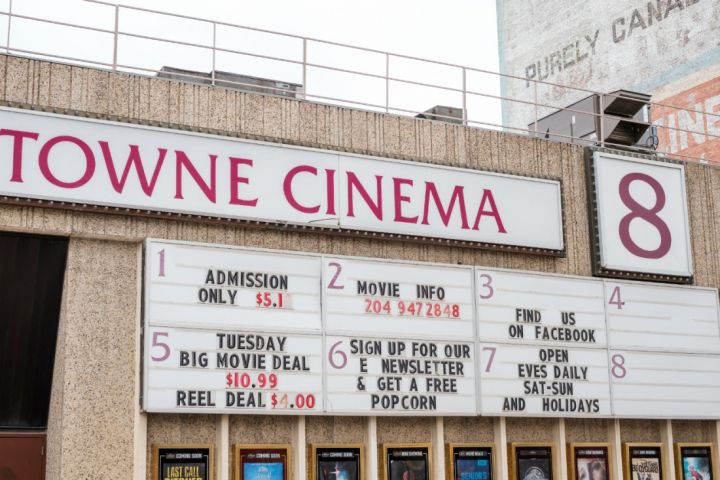 Towne Cinema 8 is one of eight theatres that opened in the 1980s in Winnipeg. Of these eight, four remain.

While most of the city’s defunct movie houses have been demolished, those that still stand such as the Metropolitan (now Metropolitan Entertainment Centre) or the Uptown (which became Academy Lanes) are exemplary of movie theatre architecture of their day. They were part of a system of downtown first-run theatres like the Met and smaller second-run “neighbourhood” theatres like the Uptown or The Park Theatre.

Though fewer theatres were built in Winnipeg during the Great Depression, those already in business thrived as a source of inexpensive entertainment.

The early ’50s saw an influx of new drive-in theatres, but the explosion of television and the emergence of decentralized shopping malls led to a steep decline in the number of theatres through the following decades. Of the more than 90 movie theatres that at one time operated in Winnipeg, none of the theatres operating before or during the TV-era bust survive today.

While some continued as live venues (The Park and Garrick) or other businesses (Roxy and Academy Lanes, King’s), most of the buildings were destroyed. In their places one can find strip malls, hotels and empty lots. Others still, like the beautiful Palace Theatre on Selkirk Avenue or the Oak (which became Mitchell’s Fabric), sit boarded up and decaying.

Back to the Future

How can today’s theatres ensure they don’t end up similarly shuttered?

Those predicting cinema’s end say viewers can get the same experience at home. While modern chains have adopted gimmicks like 3D and D-Box to create a unique experience, many fail in providing the basic product of a quality viewing experience.

In the wake of the industry-wide shift from film projection to digital, many chains have stopped employing projectionists altogether. Viewers have noticed, and the Internet is rife with articles detailing stories of flat, dim projection. 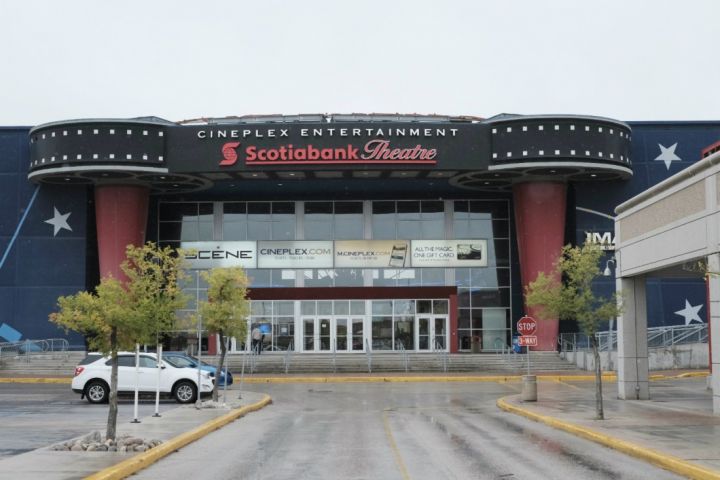 The Scotiabank Theatre - previously known as SilverCity Polo Park - opened in 1998 and is part of the Cineplex chain.

Cineplex too has done away with projectionists, but Pat Marshall says that’s not indicative of poor quality.

“(The role of projectionist) goes back to the days when films were highly flammable and projector bulbs were under immense pressure and could blow up,” Marshall says. “As a result you had a specialist in the area. Having moved away from film … those safety issues don’t exist anymore.”

But historical reality doesn’t back up Cineplex’s claims. Flammable nitrate film has been out of popular use since the late 1940s, long before chains abandoned projectionists.

“We do a lot of different programming and there’s a strong need for that skill,” Dave Barber says of the position. “We check out everything before we screen a film, because there can be problems. They control the light and sound levels in the theatre. If something goes wrong, they have to solve it.

“It’s important to show films in the correct aspect ratio,” he continues. “I’ve seen problems in chain theatres. Trying to find the right person to tell about the problem isn’t easy.”

Let’s All Go to the Lobby

It’s a conundrum that puts movie lovers in a precarious position: Valuing the theatrical experience requires shelling out dollars, but to preserve its worth, viewers can’t be willing to settle for a less-than-ideal experience.

Ultimately, it will fall on moviegoers, not marketing strategies, to keep Winnipeg theatres alive. Curle says that, if Winnipeg’s movie past can tell us anything about our future, it’s that movies follow the people.

“I don’t want to reduce it to demographics,” Curle says, “but in economic terms, you can to a certain extent. Before shopping centres, downtown was the magnet for shopping and leisure activities.

“That’s what I became most interested in (while researching Winnipeg theatres). The demographics, the geography and just the business of how a city conceives of itself.”

Click here for an interactive map of theatres opened (and closed) in Winnipeg since 1883.