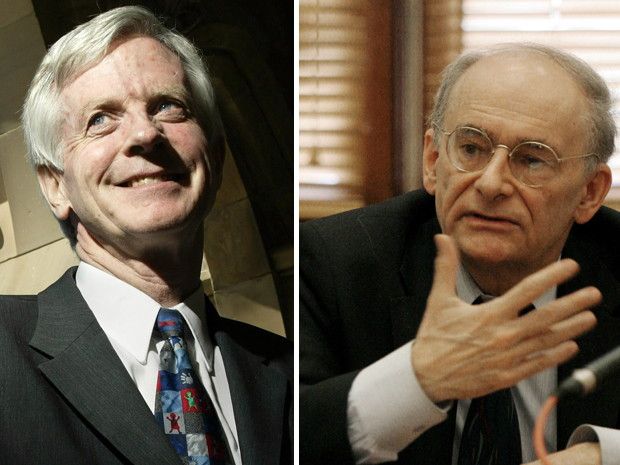 Internationally renowned lawyer and human rights activist David Matas and the Hon. David Kilgour will speak about Bloody Harvest: The Killing of Falun Gong for Their Organs, the book they co-authored and published in 2009. The book details organ harvesting practices in China.

The lecture will take place Wednesday, Jan. 18 at 6:00 p.m. in Eckhardt-Gramatte Hall at the University of Winnipeg. The event is co-sponsored by the Canadian Political Science Students' Association.

Falun Gong is a modern day spiritual/exercise movement which began in China in 1991 drawing on and combining ancient Chinese traditions. The Chinese Communist Party, alarmed at the growth of the movement and fearing for its own ideological supremacy banned the movement in 1999. Falun Gong practitioners were arrested in the hundreds of thousands and asked to recant. If they did not, they were tortured. If they still did not recant, they disappeared. Allegations surfaced in 2006 that the disappeared were being killed for their organs which were sold for large sums mostly to foreign transplant tourists. It is generally accepted that China kills prisoners for organs. The debate is over whether the prisoners who are killed are only criminals sentenced to death or Falun Gong practitioners as well. The authors produced a report concluding that the allegations were true. The book Bloody Harvest sets out the investigations and conclusions of the authors.

David Matas is an internationally renowned lawyer and human rights activist. He received a BA from the University from Manitoba, an MA from Princeton University, a BA (Jurisprudence) and a Bachelor of Civil Law from the University of Oxford. Mr. Matas has served the government of Canada in numerous positions including as member of the Canadian delegation to the United Nations Conference on an International Criminal Court and has been involved in several different organizations including the Canadian Helsinki Watch Group, Beyond Borders, Amnesty International, and the Canadian Council for Refugees.

In 2010 he was nominated for a Nobel Peace Prize for his investigation alongside the Hon. David Kilgour of organ harvesting practices in China as detailed in their book Bloody Harvest: The Killing of Falun Gong for their Organs. His other works have included Justice Delayed: Nazi War Criminals in Canada (1987) with Susan Charendoff, Closing the Doors: The Failure of Refugee Protection (1989) with Ilana Simon, No More: The Battle Against Human Rights Violations (1994), Bloody Words: Hate and Free Speech (2000), and Aftershock: Antisemitism and Anti-Zionism (2005). He is currently the Senior Legal Counsel to B’nai Brith Canada.

About David Kilgour David Kilgour is a vice-president of the Parliamentary Forum of the Community of Democracies, co-chair of the Canadian Friends of a Democratic Iran, past chair of the Latin America and Caribbean policy working group of the Ottawa branch of the Canadian International council, a Fellow of the Queen's University Centre for the Study of Democracy and a director of the Washington-based Council for a Community of Democracies (CCD).

First elected in 1979, he was re-elected seven times, most recently in 2004, for the south-east part of Edmonton. During his time in Parliament he was Deputy Speaker and Chair of the Committees of the Whole House, Secretary of State for Latin America & Africa, and Secretary of State for Asia-Pacific. He did not stand in the 2006 election.

He continues to be active in issues of human rights and international concern. A recent book, Uneasy Neighbo(u)rs, co-authored with David Jones, a former American diplomat, discusses the relationship of Canada and the USA in the dynamics of state, industry and culture .In 2010, he published with David Matas Bloody Harvest: The Killing of Falun Gong for Their Organs. He and Matas were recently awarded the 2009 Human Rights Prize of the International Society for Human Rights in Switzerland for their work in raising awareness of state-sponsored organ pillaging in China.