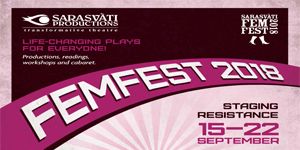 FemFest has been up and kicking since 2003. What started as a small, grassroots festival to showcase women playwrights quickly grew into a week-long  festival featuring female theatre artists from Winnipeg, Canada and the world. Over the years we have developed countless new plays, brought dozens of artists to Winnipeg to share their work and provided skill development to actors, directors, designer and technicians in Winnipeg. FemFest has also expanded to include performance art, installations, dance, video and music.

This year the festival is turning 16, offering life-changing plays for everyone. We’ll have touring shows from Toronto to Morocco plus a new art walking tour.

Our amazing line-up includes:
The Game

Sound of the Beast

We’re also offering workshops and readings through the festival. For tickets and information – www.femfest.ca or call us at 204-586-2236.