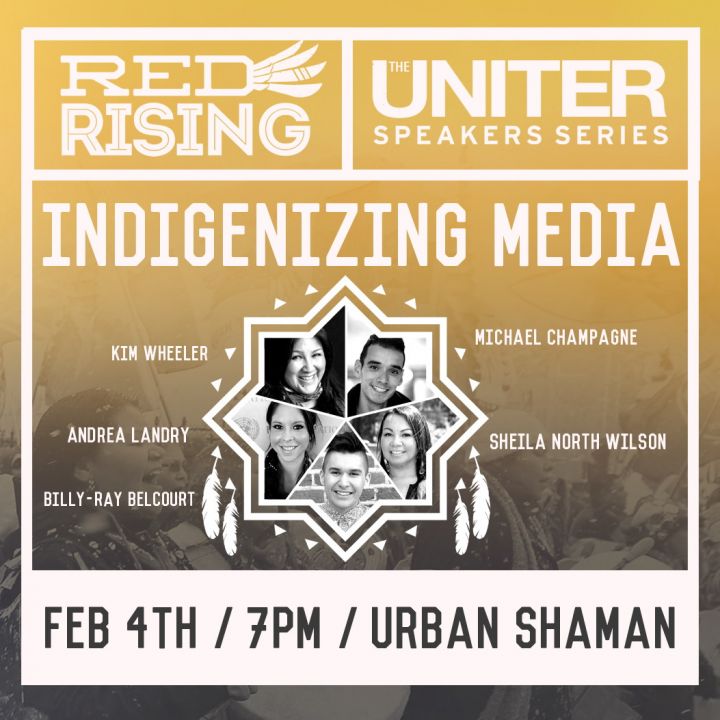 Join us for a critical discussion on Indigenous representation in media and how projects like Red Rising Magazine are changing the media landscape.

Our special guest speakers include:

Andrea wrote her master's thesis on the CBC and offered a critical analysis on how they covered the White Paper, Oka crisis, and Idle No More movement

Billy-Ray is the first Indigenous Rhodes scholar. He is an emerging writer who has been recently featured in activehistory, rabble.ca and also has his own blog at: nakinsowin.wordpress.com

Michael was recently featured in Time magazine as one of 24 of the world's next generation leaders. Michael has had many encounters with the media opposite the camera.

Sheila is currently the Grand Chief of MKO. She has a significant amount of mainstream media experience, most recently CTV before resigning to run for the Grand Chief position.

Kim has brought positive Indigenous stories to both the mainstream and Indigenous media for over 20 years. She currently produces the hit CBC Radio series Unreserved, with host Rosanna Deerchild.

This event will be all ages and everyone that is interested in writing, media, and journalism is invited to attend a good night of discussion.